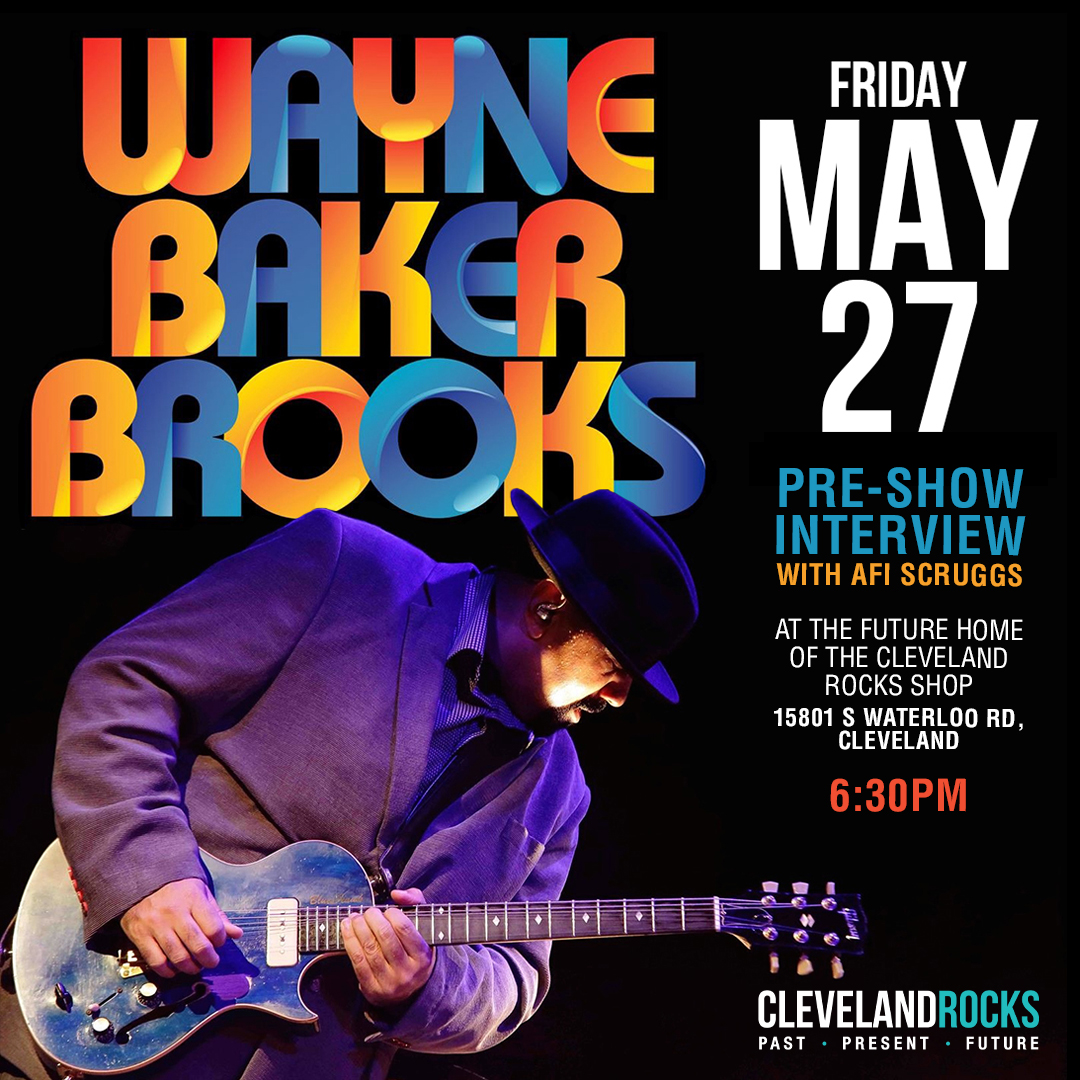 Join us for a pre-show interview with Wayne Baker Brooks at 6pm on Friday, May 27th at the future home of the Cleveland Rocks Shop (former Music Saves storefront). Award winning journalist, author, and musician Afi Scruggs will conduct the interview and also perform.

This is a free event with limited capacity. Please RSVP to attend:
https://www.eventbrite.com/e/pre-show-interview-with-wayne-baker-brooks-tickets-342019057207

Born and raised in Chicago, IL amongst the most prolific blues legends and blues masters in the world, Wayne Baker Brook’s blues roots may run deeper and wider than the Great Lakes themselves.  Chicago Blues laid the foundation for Wayne’s innovative style. Growing up Brooks was a regular visitor to such historic places as Chess Studios, Checkerboard Lounge, Wisefools, and many other blues landmarks at which he witnessed many live performances by blues masters like Buddy Guy, Jr. Wells, Luther Allison, KoKo Taylor, the great Muddy Waters, & his father. The youngest son of blues master Lonnie Brooks – Wayne Brooks was literally born into the blues!  Leaving no way around the fate appointed him he soon joined his father’s (Lonnie Brooks)  band as his rhythm guitarist then quickly became the musical director. Then in 1997, he formed the Wayne Baker Brooks Band while continuing to work with his father’s band. He made a cameo appearance in the film Blues Brothers 2000.

With the release of his  acclaimed debut CD “Mystery” “an album that brilliantly draws on blues, blues rock, soul, funk and beyond”. “Mystery” received multiple awards and praise from the music world. Along with releasing his book “Blues for Dummies” he was soon touring the world and featured on national TV  programs (including ABC, CBS, NBC, FOX, & CNN’s “Showbiz”), as well as endless radio programs, print media, & special media events including performing for First Lady Hilary Rodham Clinton at Chess Studios (Willie Dixon Blues Heaven Foundation) with legends Bo Diddley, Lonnie Brooks, KoKo Taylor. After Wayne and his special guest exhilarating set, Hillary stated, “My husband is going to be so jealous he missed this!”.

Wayne Baker Brooks and this Band continue to play the world over with WBB’s signature top-shelf brand of guitar playing and a live show that should not be missed.

Love the blues? You’ll love Afi. Love RnB? You’ll love Afi. If you love to groove, no matter the music, you’ll definitely want to be in the audience when Afi plays. Whether solo or with her band, Afi’s mission is to get you swaying and tapping your feet.

Afi plays bass and keys. She’s a singer-songwriter as well as a producer. No matter the music, Afi believes in the groove. Listen to her. You’ll hear the groove and you’ll definitely feel it.

Afi grew up in Nashville, Tennessee, listening to iconic radio stations: The Grand Ole Opry on WSM, John R on WLAC. Although she was a kid, she inhaled everything she heard.

From piano lessons as a youngster, Afi started playing gospel piano when she was 16. As an adult she always flirted with the bass. She’d pick it up, study for a while and sell the bass. In 2009, Afi decided to give it one last try, but she gave herself a mission. This time, she’d find a place to play. Fast forward. Fulfilling that bucket list item led to starting a band, producing and releasing original music.

What else does Afi do? Since 2004, she’s worked as a teaching artist for elementary and high school students, using music and songwriting for everything from anti-bigotry efforts to financial literacy. She’s also an award-winning journalist and author, whose work has appeared in USAToday, Essence.com and on NPR affiliates and programs.