Space:Rock Gallery is a permanent music-centered photography gallery in a refurbished storefront located at 15721 Waterloo Road. The space opened in early 2013 and won Best Rock Gallery in Cleveland magazine that year. 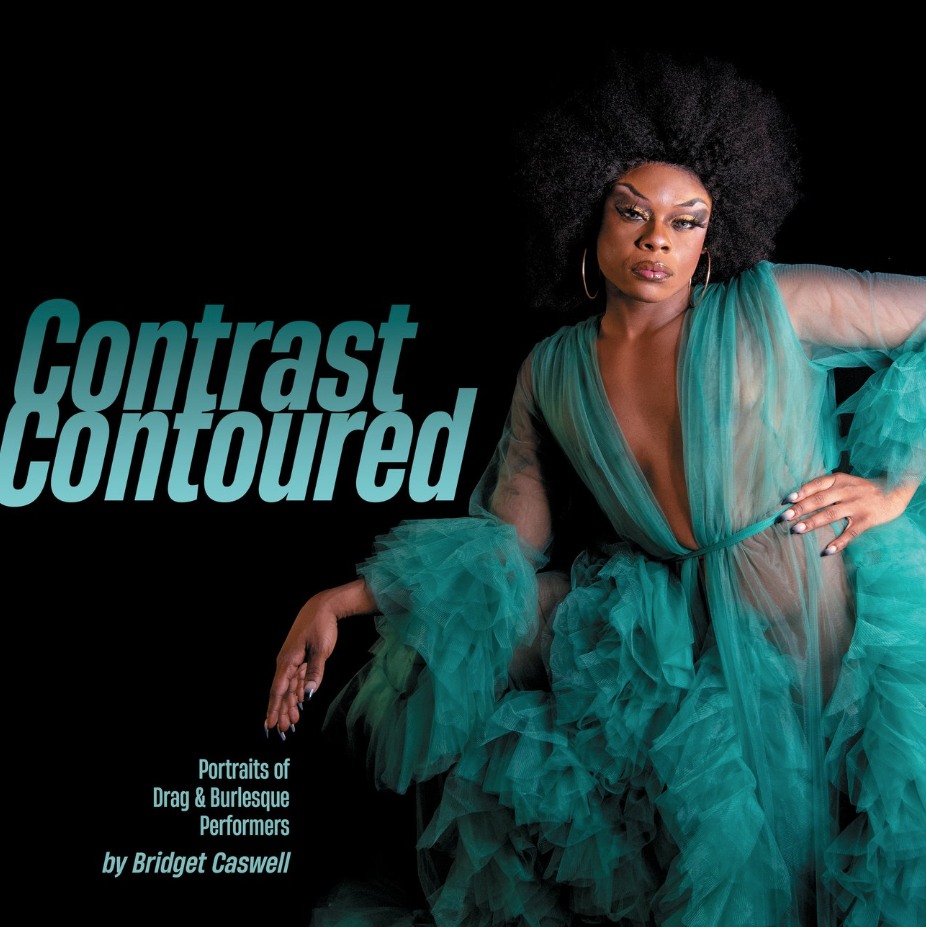 Maria Neil Art Project (MNAP) and Cleveland Rocks:PPF are proud to present this monumental exhibition with photographer Bridget Caswell, featuring 60+ performers of burlesque and drag. Contrast Contoured will be exhibited in two venues (MNAP, Space: ROCK gallery), and include personal portraits and never-before-seen photos of burlesque and drag performers in and out of their stage personas. These images highlight the past several years’ worth of work by Cleveland photographer Caswell.
Bridget Caswell uses her keen eye to capture what many in the LGBTQIA+ community – and the community in general – never get to see: who our favorite performers are without the makeup and feathers. A bonus: the performers add their own words to accompany Bridget’s captivating images. They lay bare why they do what they do and provide details that call you back to look at the ‘before & after’ effect the show presents. Caswell has culminated all these images and words into a book of the same name, which will be available for purchase through the duration of the exhibition.
Friday, August 5th through Friday, October 7th
Special Ohio Burlesque Festival hours: Thursday, August 11th, Friday August 12th and Saturday, August 13th from 5-7p.m. at MNAP (other locations will be open)
Other hours by appointment
Maria Neil Art Project 15517 Waterloo Road
Space: ROCK gallery 15721 Waterloo Road 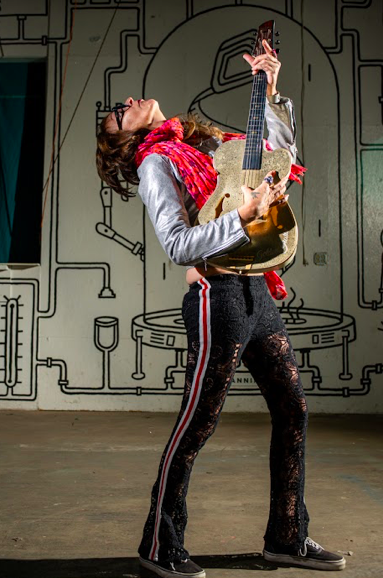 Cleveland Rocks: Past, Present and Future is focusing on the visual side of music with Fashion Rocks, a project to make local musicians look as good as they sound, organized by fashion designer Jacci Hammer.

The exhibit will run through the end of July. On June 29 at the Beachland Ballroom Fashion Rocks will come alive with a music-and-fashion show, featuring some of the in the photos and additional musicians. Stay tunes for more details!

A History of the Headshot: Anastasia Pantsios and Bridget Caswell

Every band or musician should have a promotional headshot. In the old days, a photographer like Anastasia Pantsios would be hired to take a few dozen shots in her studio or out at an interesting backdrop. The band would pick a shot from a proof sheet and the negative would be enlarged and printed with a logo as an 8×10 official promo shot that would be given to the press or added to a package handed to venues or promoters so you could look professional enough to be hired. Today you still have to have a good headshot but it’s done digitally and stored on your website or in an EPK (electronic press kit) for press and promoters to grab. This display at Space:ROCK Gallery shows both old and new school images. Anastasia’s work included DEVO, Michael Stanley, Spudmonsters, The Generators and many more. Bridget Caswell recently photographed a handful of aspiring locals at our workshop on March 20 and represents a younger generation of music-loving photographers ready to snap a digital image. We will have a few other more recent images and are compiling a list of available photographers as part of this project. Thanks to the Ohio Arts Council for the support to make this possible. 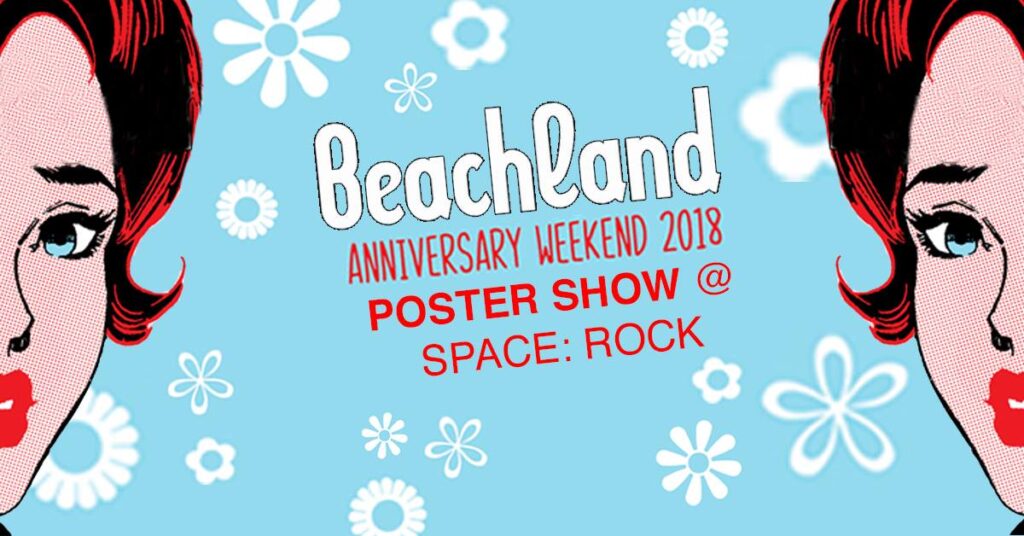 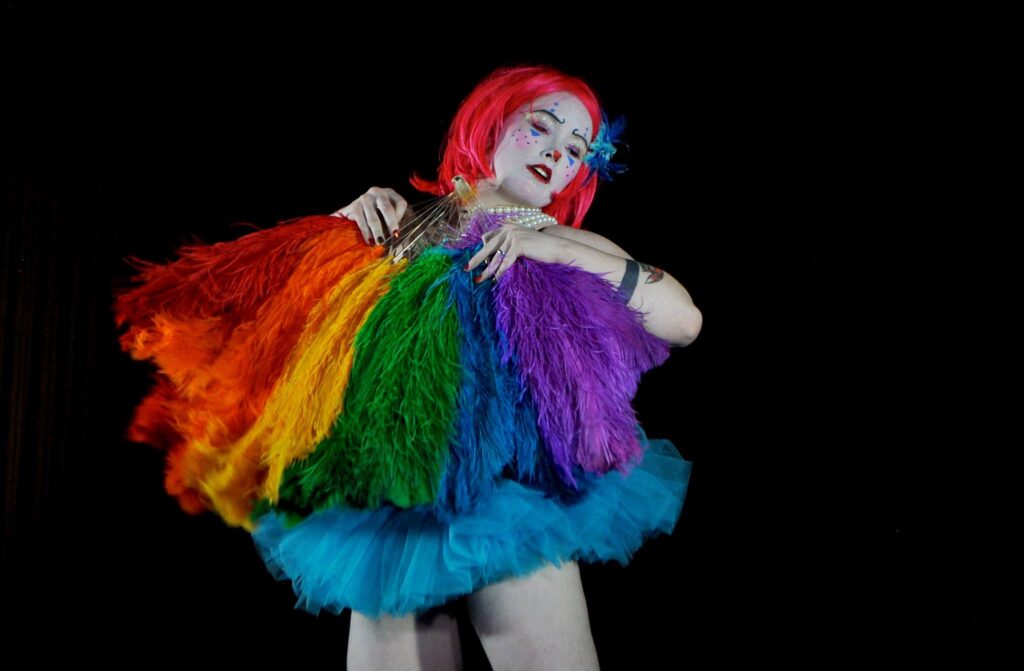 All That Glitters: Burlesque at the Beachland

Four Ohio photographers share their favorite shots of previous Burlesque festivals prior to the 7th annual Ohio Burlesque Festival at the Beachland Ballroom. These photographers capture performers of all races, ethnicities, gender identites and body types which is what makes this exhibit so unique. Photographers include: Eric Paul Owens, Anastasia Pantsios (credit above), Bob Perkoski, and Emanuel Wallace.
During Walk All Over Waterloo, there will be bands playing and being interviewed in the Space: Rock Gallery. The John McGrail Band plays at 6:00 p.m. and Sands & Hearns starts at 7:00 p.m. Please come and enjoy some music and stick around for the interviews! 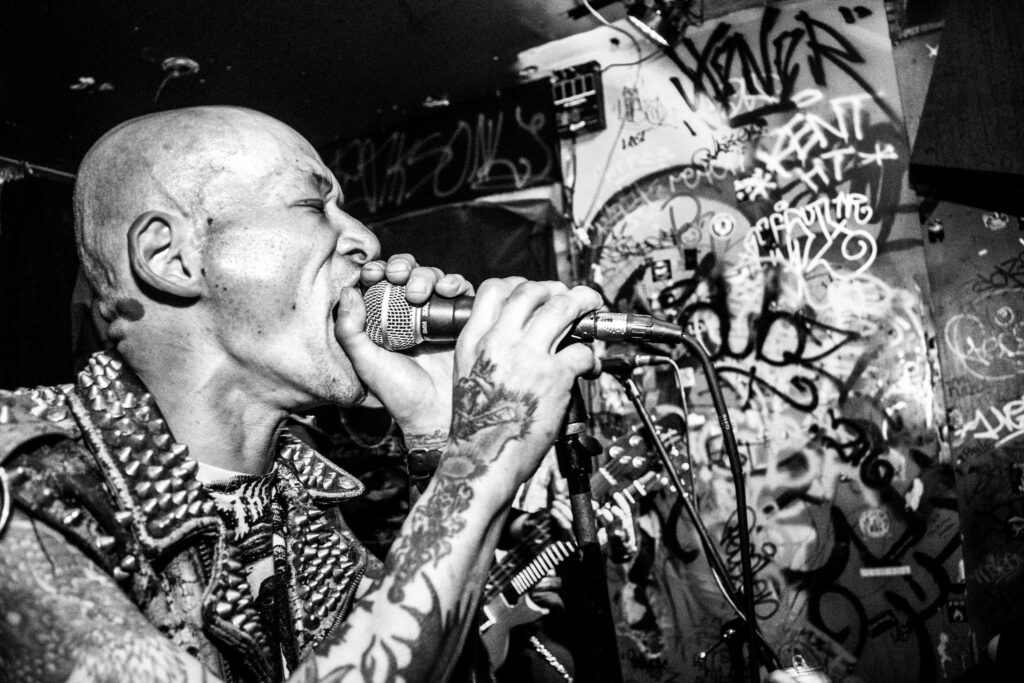 A Deeper Look into the Underbelly of Cle’s Punk Rock Community
Recent Photos by Justin Nelson. A young self-taught photographer from Cleveland, Ohio, Justin became intrigued by the underbelly of the punk world in Cleveland about 7 months ago. With so many photogenic local and touring punk/indie/hardcore/rap acts, he found himself being fascinated with shooting live band photography. He spent many late nights shooting shows at Cleveland punk venues such as Now That’s Class. Nelson has captured the chaos of the live experience of bands such as Cloud Nothings and The Suicide Machines among many others. Justin was so intrigued by ‘Horrible Fest,” he took it upon himself to publish a book of his photos documenting this exciting and sometimes debaucherous music festival. 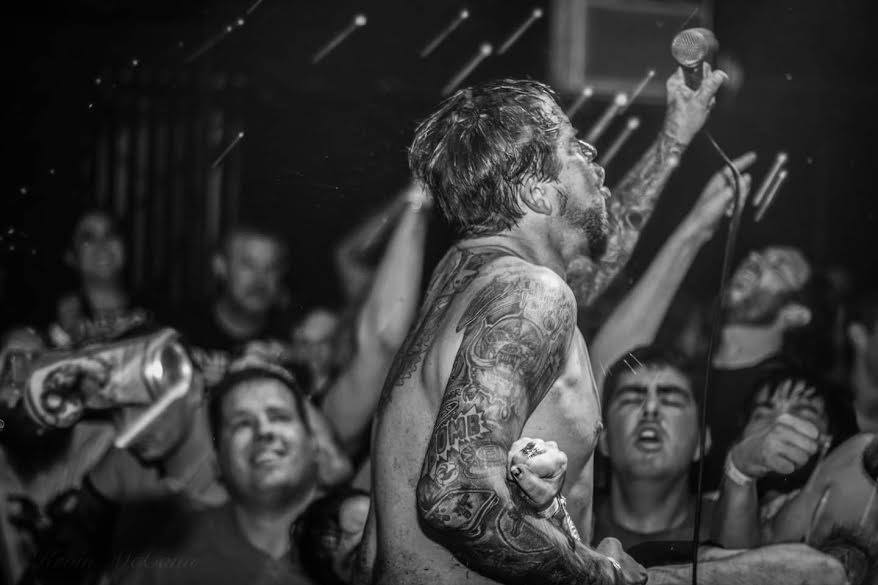 Shots in the Dark: The latest works by Kevin McCann.

Cleveland photographer Kevin McCann can be seen slithering through crowds and dodging beer cans while nesting his camera tightly under his arm at venues all over Cleveland and abound, looking to capture every exciting moment from the sensational bands that make up “Shots in the Dark.” McCann studied photography at Cuyahoga Community College and first started shooting on the streets of Pittsburgh and Cleveland in 2005. A a fan and musician himself, Kevin started taking his camera to shows and remembers shooting the Conspiracy Fest at Mahall’s as the hardcore/punk event got rather “unhinged” as he was documenting this raucous showcase of local and national talent. So he’s been in the rock and roll trenches ever since, often using a fisheye lens to get a special distortion and capture those magic moments of the live experience that can only be harnessed by a good photo. Digging through years of archives dating back to Memphis TN’s Gonerfest 6 in 2009 to present day Cleveland rock n’ roll hot spots, “Shots in the Dark” is a photographic showcase of the primarily underground music scene of local and touring artists. 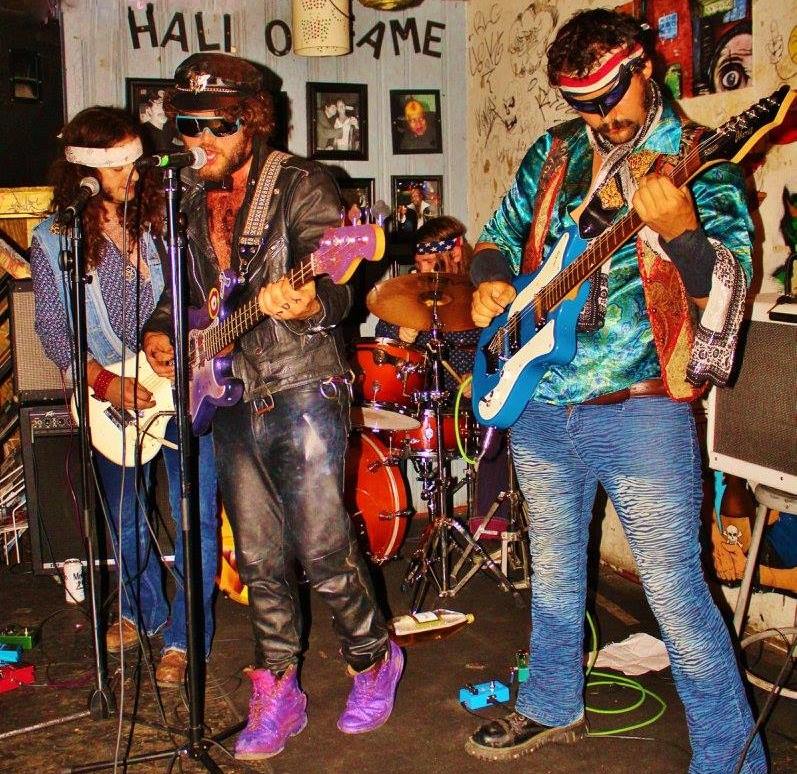 On the Pulse: Latest Works by, Jamie A. Bradley

On the Pulse focuses on the ‘here and now’ of the Cleveland independent music community. It is true that Cleveland has a rich musical heritage but the scene is ever expanding and morphing; reinvention is all part of what makes Cleveland unique. Jamie A. Bradley’s love for music, photography, and Cleveland is a perfect union. She first picked up a camera in middle school, and learned to shoot and develop film and prints with her father, who was a local graphic arts and photography teacher.
The images featured in this show were taken between 2009-2016 and include a wide variety of local bands: from Ace and The Ragers and Alan Madej, to Blaka Watra, Disengage, Fuck You Pay Me, Goldmines, Heavenly Queen, Hiram Maxim, Kid Tested, Ma Holos, New Planet Trampoline, Obnox, Queen of Hell, Sammy Slims, Swirly and The Fryer, Uncle Scratch’s Gospel Revival Band, Uno Lady and many more.
Bradley has circulated through the Northeast Ohio scene frequenting venues from Annabell’s and Musica in Akron to Happy Dog, The Five O’Clock, Spitfire and Survival Kit in Cleveland, plus all the venues for larger shows like The Rock and Roll Hall of Fame.
Cleveland is not only rich in local talent but the city also offers the amenities that make for a spectacular backdrop for all sorts of amazing touring acts. She has had the opportunity to shoot touring acts such as: ChaChi On Acid, James McMurtry, Jungle Rockers, Guitar Wolf, King Buffalo, New Bomb Turks, Wake The Dead and White Mystery. 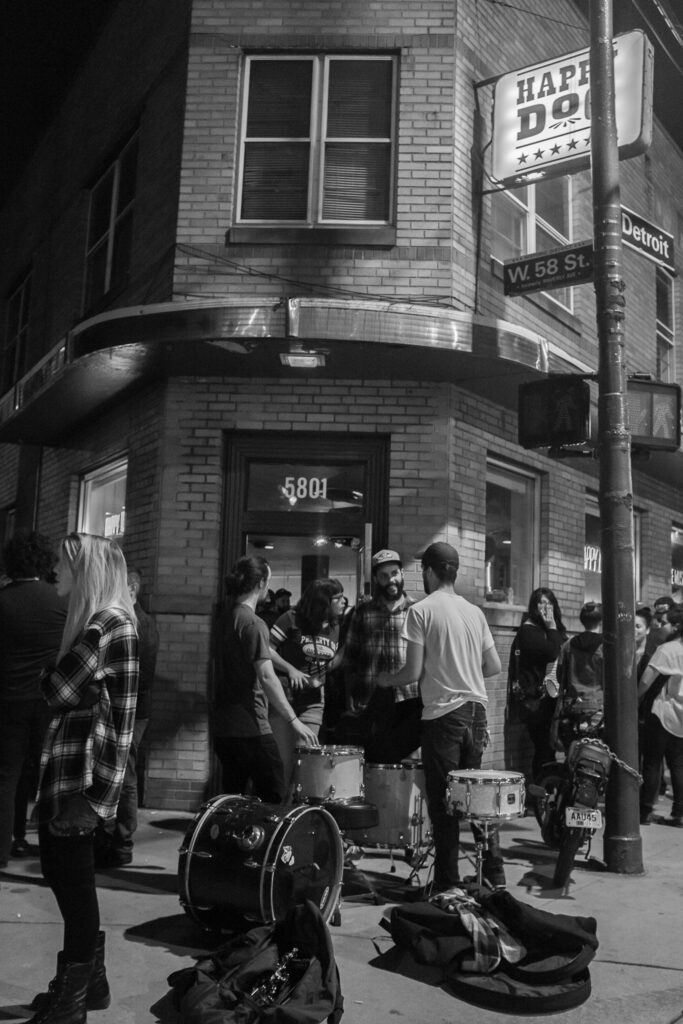 A few small local music clubs have been meeting and sharing information for the last few years. Most of these venues anchor their neighborhoods, struggle to maintain old infrastructure but provide jobs and places for local and touring musicians to find an audience. Join us as we journey into the lens of revered Cleveland photographer Frank J. Lanza, who immersed himself in this music community for the last month. Lanza, who has has become known as a portrait photographer, shoots almost exclusively in black and white and captures a wide variety of performances on stages big and small, but also grabs the staff taking the garbage out or restocking beer. This is in part a study of the people who keep the wheels in motion, leading up to what the audience experiences as the live performance. In some ways, Frank became an average Clevelander going to see live music and finding a great new local band. On the other hand, he goes behind the scenes and captures the faces of the process. This show is one step in a larger mission by Cleveland Rocks: Past Present and Future to describe how and why this small independent music culture nurtures the Cleveland economy. 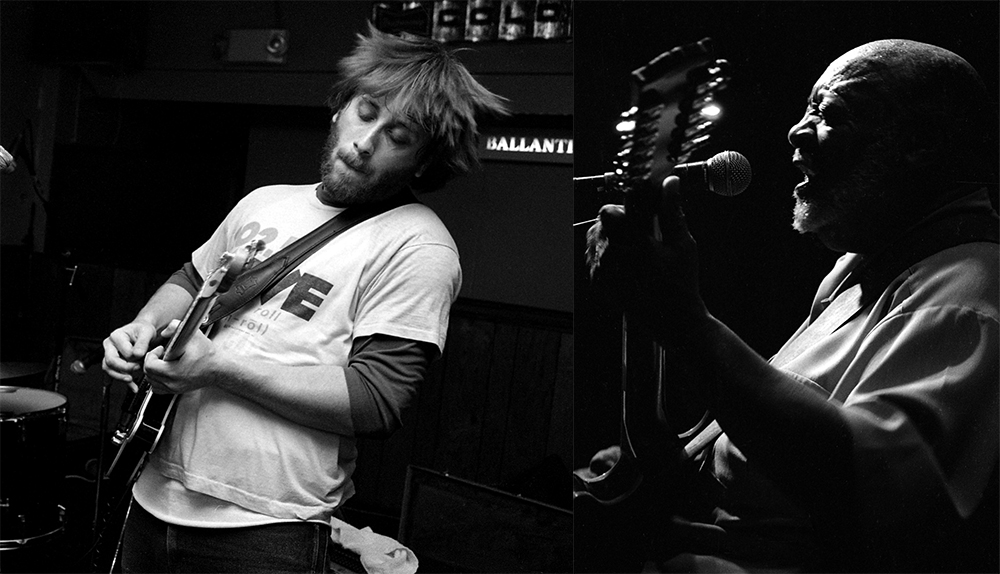 Photos spanning 15 years of Beachland Ballroom and Tavern, from The White Stripes to Archie and the Bunkers. 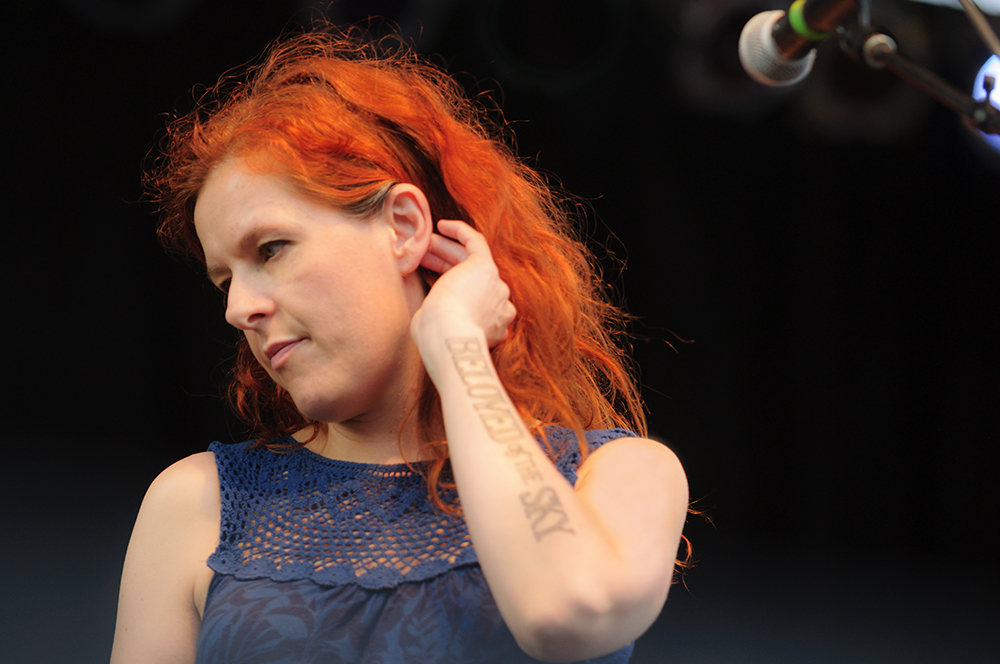 A relative newcomer, Mara Robinson started shooting music events in 2010 and made her mark locally with the Lottery League that year. This show includes striking images she captured at shows and festivals like Riot Fest, Pitchfork and Nelsonville, including Neko Case, Sean Lennon, Dinosaur Jr. and Ezra Furman. 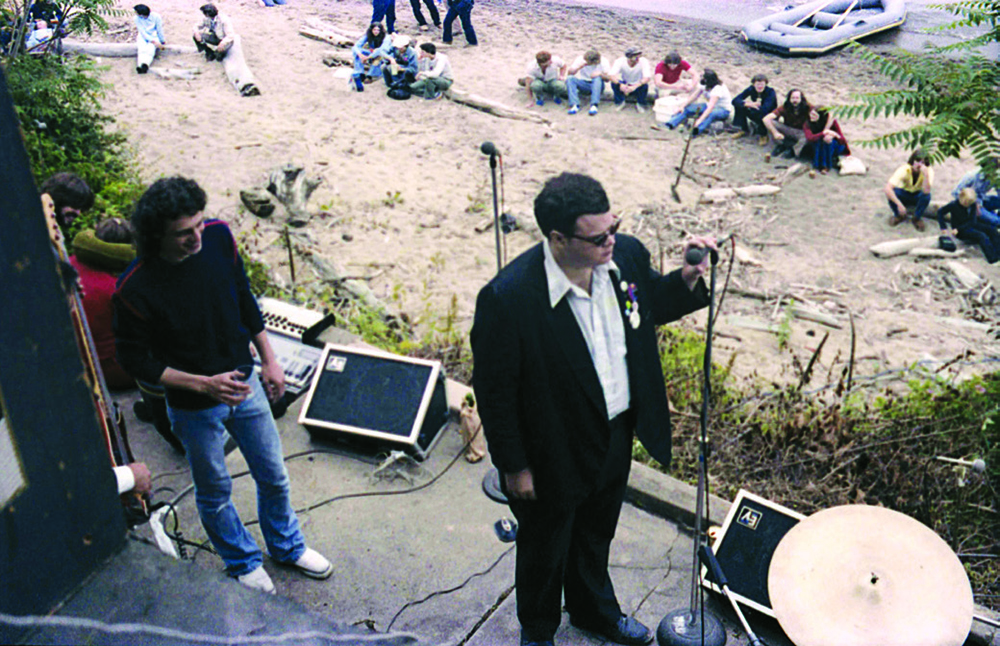 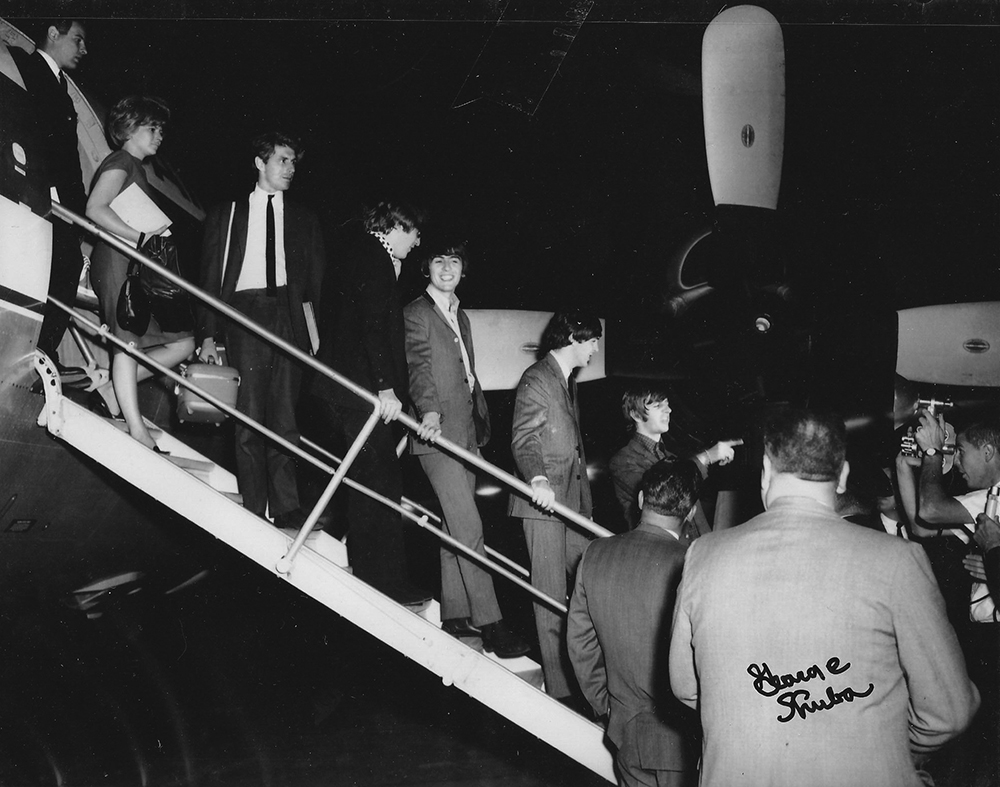 There at Ground Zero when The Beatles land in Cleveland. This show centers on photos from the mid-late ‘60s of The Beatles, The Rolling Stones, The Who, Jimi Hendrix and The Doors.

Sat. Nov 15: George Shuba, interviewed with noted pop culture author Michael Olszewski
A Q&A with photographer George Shuba on his beginnings in the ‘60s; how he got the good shots; and what it was like behind the scenes.

Sat. Nov 29: Wally Bryson, interviewed by music business veteran John Awarski
A Q&A with Wally Bryson on his days with The Choir when they opened for The Who in 1967; what the scene was like then; and how he moved on to The Raspberries.

It will be Wally day on Waterloo with evening fundraiser at Beachland Ballroom: