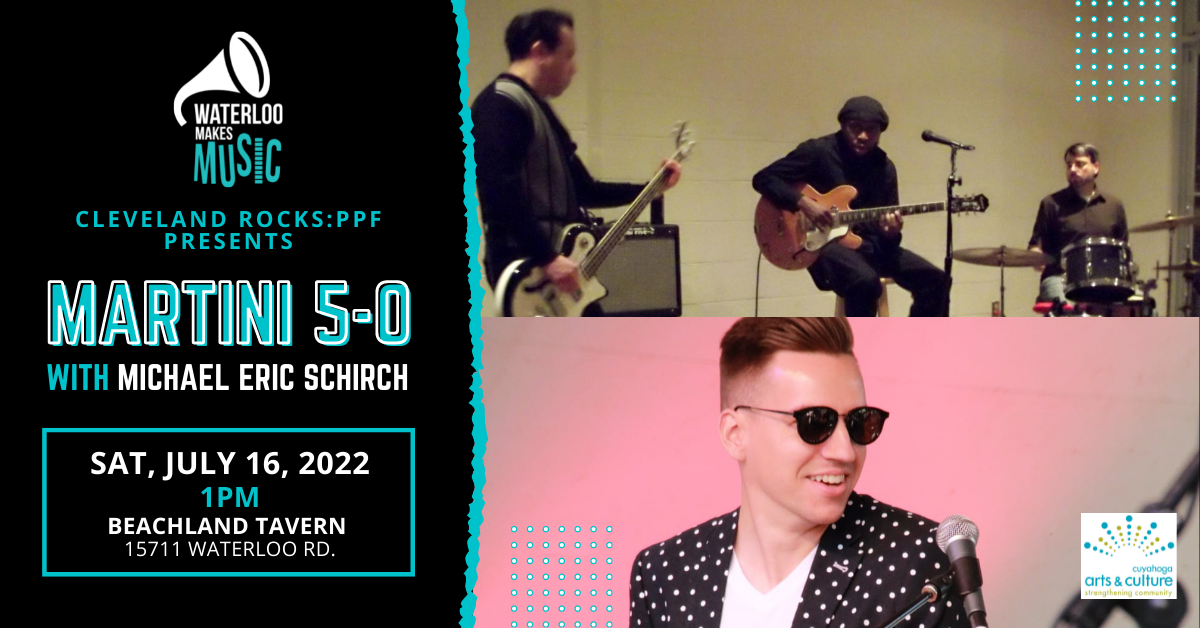 Waterloo Makes Music (WMM) is a free concert series, programmed by Cleveland Rocks: Past, Present, Future, as a gift to all the music lovers in the community, and a celebration of Cleveland’s amazing musical legacy. Held in the Waterloo Arts & Entertainment District, the Tower series features local Waterloo area bands/musicians.
Saturday, July 16, 2022
Martini 5-0 with Michael Eric Schirch
1pm at The Beachland Tavern
Free Show
Martini 5-0: A refreshing blend of jazz standards, lounge and surf.
https://www.facebook.com/MartiniFiveO
Michael Eric Schirch: Michael Eric Schirch is a chart-topping contemporary jazz pianist, producer, and songwriter hailing from Cleveland, OH. Schirch hit the Cleveland music scene in 2012 with his trio Blu Monsoon, and with well over 100 public performances per year, it’s almost impossible to ignore his spicy piano-lead melody lines.
In 2018, Schirch’s “bright ’n’ breezy” single, “Low Tide” (performed by his trio Blu Monsoon) hit commercial airwaves on 107.3 The Wave in Cleveland, OH., making it to #1 on their “Top Hits” chart. It wasn’t long after that “the Smooth Jazz Network” picked up Low Tide and broadcast it to over 50 radio stations in 26 states. One year later, his single “You Know That’s Right” hit #3 on 107.3 The Wave and debuted at #4 on One World Radio in the UK.
Schirch’s musical expertise doesn’t stop with his own compositions though: he also owns a recording studio and production company entitled “Pineapple.studio.” Artists from all over the country choose to work with Schirch as a producer for his distinctive finesse and a certain organic authenticity he brings to their music.
When he’s not on stage or in the studio, you can find Schirch sipping coffee in Starbucks, trying new restaurants around Cleveland, or maybe even playing a little golf (“poorly” – he says.)
https://www.facebook.com/michaelericschirch
http://michaelericschirch.com
The WMM Series is made possible with support from Cuyahoga Arts & Culture.