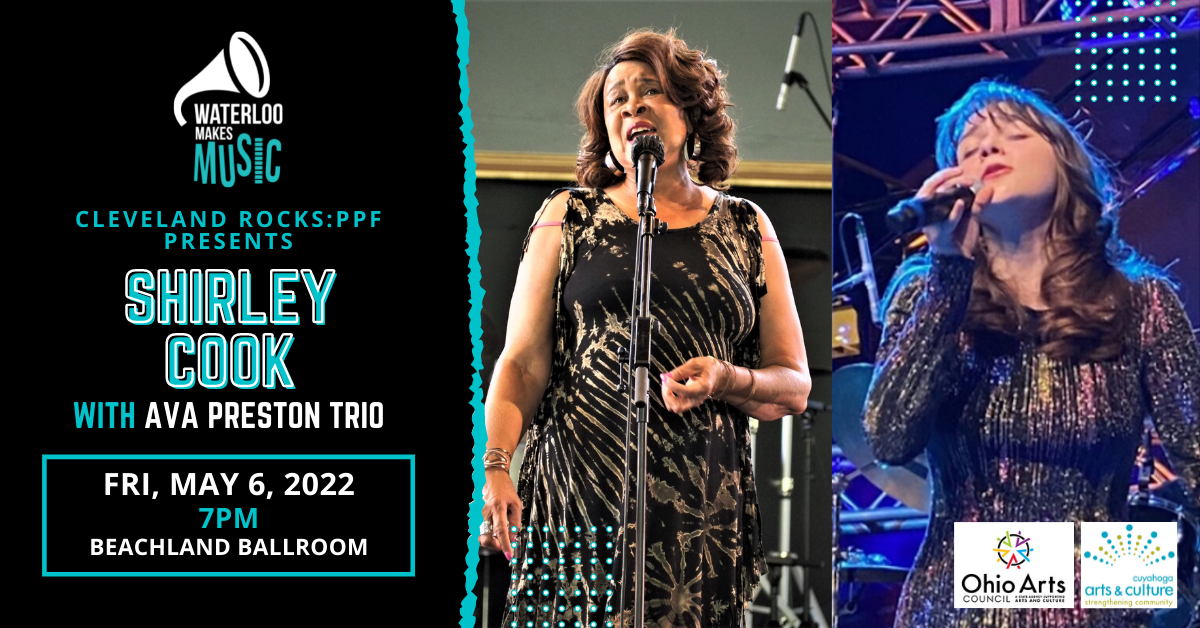 Waterloo Makes Music (WMM) is a free concert series, programmed by Cleveland Rocks: Past, Present, Future, as a gift to all the music lovers in the community, and a celebration of Cleveland’s amazing musical legacy. Held in the Waterloo Arts & Entertainment District, the Tower series features local Waterloo area bands/musicians.
Friday, May 6, 2022
7pm at the Beachland Ballroom
Free Show
Shirley Cook:
Shirley Cook is a sultry, smoky, and internationally acclaimed jazz singer from Cleveland, Ohio. Ms. Cook has been bringing her improvisational jazz vocals to the Cleveland music scene for over 36 years. She’s been noted by the Plain Dealer as having a “deep alto voice reminiscent of the late Carmen McRae.” Also, by the Call & Post for being a “dynamic jazz vocalist who has her own style with ballads and tempos.” Ms. Cook’s captivating and highly interactive performances have a way of making you feel like she’s singing to you and only you. Through her music, Ms. Cook shares her personal experiences in hopes people will be able to connect and see themselves within her music.
Over the course of her career, Ms. Cook has derived numerous aspects of her style from her early roots in the gospel church. Born in Stotesbury, West Virginia, Ms. Cook moved to Cleveland at the age of two. At the age of eleven, she began singing in a gospel music group alongside some of her aunts. They performed for numerous church and social functions throughout the city. Throughout her early life, Ms. Cook continued to sing with her aunts and through the help of a friend, was introduced to the inspirational music of the late Billie Holiday, Etta James, Abbey Lincoln, and many more.
Along with her work on the stage, Ms. Cook has devoted many years of her life to the care and nurturance of the Cleveland jazz scene. She has helped to organize the annual Tri-C Jazz Fest on multiple occasions. When asked to organize the event, Ms. Cook rounded up 72 local musicians in a span of two weeks. Ms. Cook has an astounding record within the community and unceasingly projects her love for jazz in everything she does. Ms. Cook currently resides in the Cleveland area and continues to showcase her charismatic spirit through her performances.

Ava sings a variety of genres and languages including songs in French, Portuguese and Spanish. Ava draws inspiration from jazz legends like Ella Fitzgerald, Sarah Vaughn, Billie Holiday, Cyrille Aimee and Astrud Gilberto. Ava believes music is a universal language that can unite people and promote acceptance of differences around the world.

Ava’s artistic influences and inspiration are best explained in her own words. She writes:

“I find people inspiring most of all. Listening to the vocal “greats” including Ella Fitzgerald, Billie Holiday, Sarah Vaughn, Louis Armstrong and Nina Simone and appreciating their strong voices, not only in their singing, but in equality for all, truly made jazz into a movement as much as a genre. More modern artists such as Sarah Bareilles, Nora Jones, Alanis Morissette, Stevie Nicks, Eva Cassidy, Esperanza Spalding, Jazzmeia Horn, Jean Baylor, Somi, and Diana Krall stimulate my creative expression.

I believe that music is a universal language that can unite people around the world. My platforms are dedicated to promoting unity and anti-bullying. My hope is to move society in a positive direction with my art. Although world peace is a nice thought, I believe it is an unrealistic absolute for a flawed human condition. My goal is to spread world tolerance and the acceptance of differences through my music.”

www.avaprestonmusic.com
This specific show on May 6th is presented in collaboration with Soul City Cleveland, Fanon Hill’s documentary project that exists as a movement for community education about local culture.
The WMM Series is made possible with support from The Ohio Arts Council and Cuyahoga Arts & Culture.