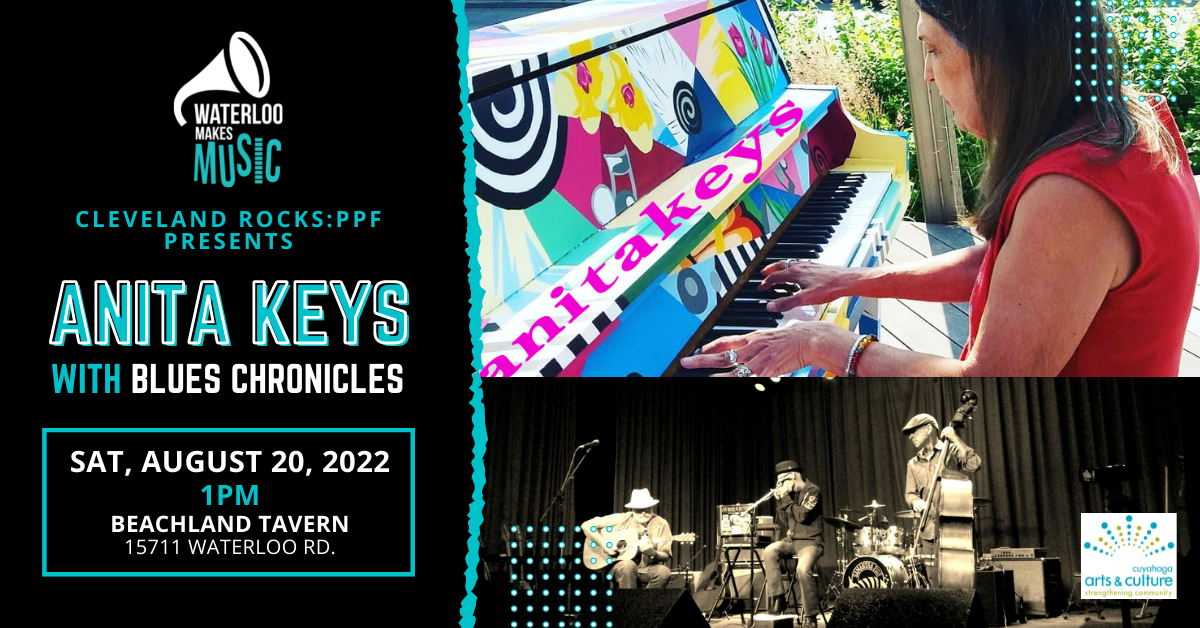 Waterloo Makes Music (WMM) is a free concert series, programmed by Cleveland Rocks: Past, Present, Future, as a gift to all the music lovers in the community, and a celebration of Cleveland’s amazing musical legacy. Held in the Waterloo Arts & Entertainment District, the Tower series features local Waterloo area bands/musicians.

Anita Keys is a Jazzy Pop Singer-Songwriter. “I was lucky to have been raised on Music. My father played marimba and organ in a three-piece jazz combo, The Versatiles, for thirty years- that’s a photo of them from the 50s!- and my mother has been singing in a church choir her entire adult life. All of my Dad’s siblings- and most of my Mom’s- sang as well, so family functions were always (literally) filled with harmony. It was only natural then that I would want to sing and play Music, and my father started teaching me on our livingroom piano when I was very young, about 5 years old. I took formal lessons from second grade through high school, and later played in several local cover bands- from Tymz Up and Off The Record to The Band Intense and Beatles Juice- all around the Cleveland area for more than 20 years before deciding to concentrate on my original music.”
https://anitakeys.com
https://www.facebook.com/msanitakeys
https://open.spotify.com/artist/5IBKbEUcQZF3RlrqCC633Y

Blues Chronicles was formed in Cleveland, Ohio (USA) 2011. Performing as an acoustic duo, trio or an electric quartet, their no nonsense approach provides a style that preserves the traditional sound of the blues and reflects their musical influences that originated from the Mississippi Delta, Piedmont plateau, Chicago and Memphis.   Following the release of their second recording, “Right Now” (winner of the Cleveland Blues Society’s, “best self- produced cd” award in 2012) the trio traveled to Belfort, France to perform at the FIMU 2012 (Festival International de Musique Universitaire). They were chosen to open and close the four day event. Performing as a duo, Reese and Al won the Cleveland Blues Society’s Blues Challenge. They represented Cleveland in the 2016 International Blues Challenge in Memphis, Tennessee.  After winning the Northeast Ohio Blues Association’s blues challenge as an electric quartet, they represented NEOBA at the 2017 International Blues Challenge

The WMM Series is made possible with support from Cuyahoga Arts & Culture.