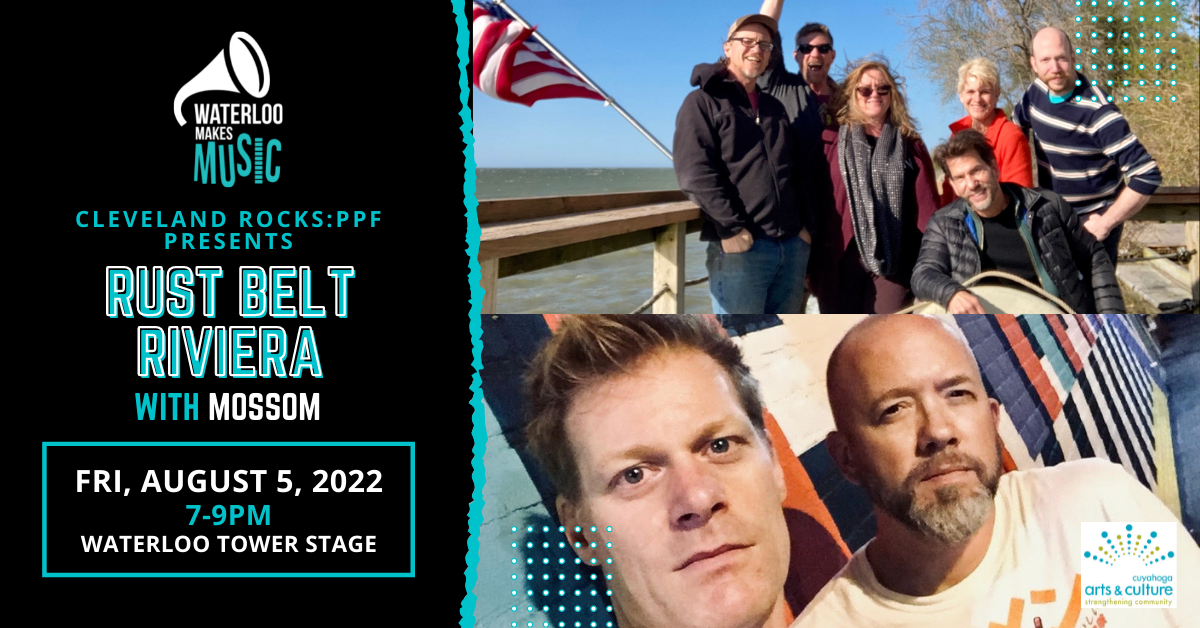 Waterloo Makes Music (WMM) is a free concert series, programmed by Cleveland Rocks: Past, Present, Future, as a gift to all the music lovers in the community, and a celebration of Cleveland’s amazing musical legacy. Held in the Waterloo Arts & Entertainment District, the Tower series features local Waterloo area bands/musicians.
Friday, August 5, 2022
Rust Belt Riviera with MOSSOM
7-9pm at the Waterloo Tower Stage (Corner of East 156th and Waterloo Rd).
Rain Site: Cleveland Rocks Shop at Music Saves (15801 S Waterloo Rd)
Free Show
Bring Your Lawn Chairs!
Rust Belt Riviera:
Rust Belt Riviera is a Rock & Roll Band, based out of Cleveland’s old Collinwood neighborhood, with a penchant for writing catchy original songs about growing up and experiencing life in the Midwest.  RBR was formed during a studio session in early 2022, where local Waterloo resident Scott Stettin and Cleveland native Tony Pappalardo were recording their song Changes (Like a Roller Coaster).  Singer and multi-instrumentalist Jodi Dobos was asked to come in and provide vocal harmonies on the song.  The results of the Demo were exactly what Scott & Tony had in mind for their new project, and Jodi was immediately asked to join the band full time.  The rest of RBR quickly formed around the trio by adding Euclid drummer Sherri Carmody, along with Collinwood’s own Chris Kennedy on keyboard & Adam Tully on bass.  The focus of Rustbelt Riviera is to create soulful, original songs that will have you grooving and singing along to anthems that pay homage to our great city.
MOSSOM:
MOSSOM [maw’sum] is an original alt rock duo from Cleveland, Ohio. Their high energy sound broke onto the scene with the release of their 2016 self-titled debut EP, recorded with multi-platinum record producer, Michael Seifert. A Waterloo Arts District artist-in-residence for over five years, the bandsmen took the pandemic to record their first full-length LP, due to for release later this year.
MOSSOM is known for their playful prog-meets-pop songwriting, crossover collaborations, and live performance chops – all of which conjure up an eclectic range of comparisons to David Byrne, Rage Against the Machine, Tool, Primus and more.
Coolcleveland.com said, “Call it ear-splitting, mind-blowing, sternum-rattling or earth-shaking. Just don’t think it’s like anything you’ve heard (or seen) before.” Described as “an alternative rock experience with an amazingly original sound,” by the Fresh Committee, MOSSOM has been selected for a myriad of regional festivals and sporting events, performed at Texas Indie Fest at SXSW, Austin, as well as, headlined top venues like House of Blues, The Beachland Ballroom, The Agora, and The Grog Shop.
The WMM Series is made possible with support from Cuyahoga Arts & Culture.