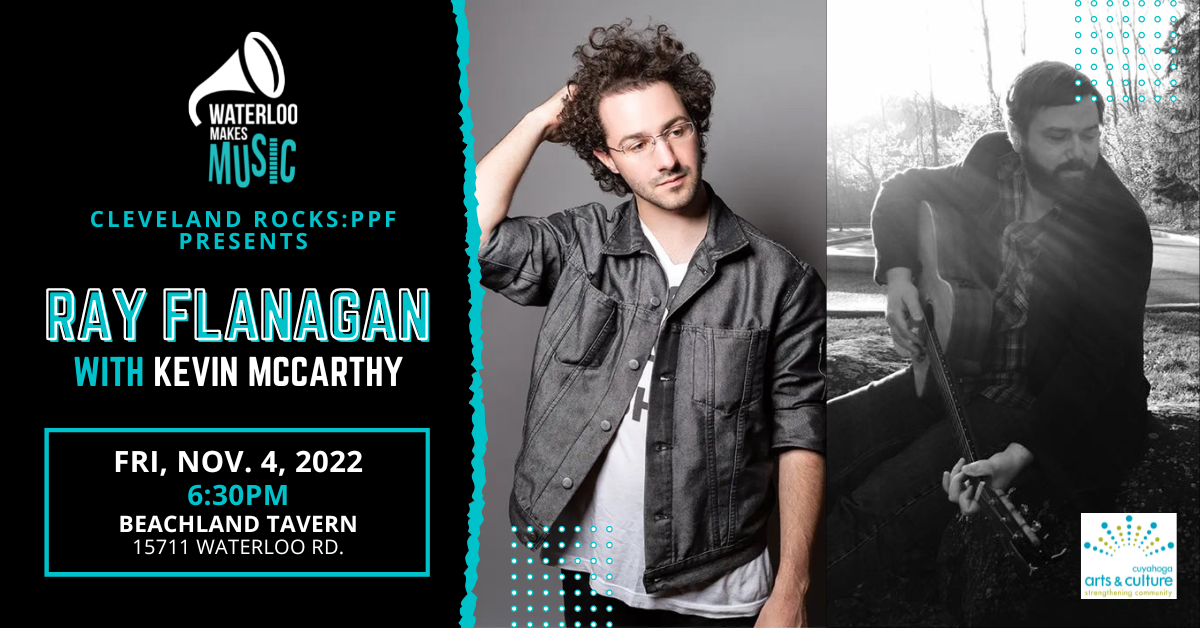 Waterloo Makes Music (WMM) is a free concert series, programmed by Cleveland Rocks: Past, Present, Future, as a gift to all the music lovers in the community, and a celebration of Cleveland’s amazing musical legacy. Held in the Waterloo Arts & Entertainment District, the Tower series features local Waterloo area bands/musicians.
Friday, November 4, 2022
Ray Flanagan w/Kevin McCarthy
6:30pm at the Beachland Tavern (15711 Waterloo Rd).
Free Show
Ray Flanagan is a Cleveland, OH based songwriter that writes and performs his songs with the no nonsense attitude of a skilled journeyman. Flanagan has performed with nearly everybody in the Northeast Ohio music scene, lending his keen musical sense and guitar artistry to artists of all genres. Even though he is one of the most sought after guitarists in Northeast Ohio, it’s his songwriting that is his true superpower. The shutdown forced Flanagan to mobilize a different outlet for his creativity, resulting in the quickened pace of releasing two self-produced songs on the first Friday of every month starting in January of 2021. These unfiltered songs offer the listener an authentic experience of a songwriter realizing their potential with every new song. Keeping a mind for music history and a creative target on the present moment, his songs and lyrics are signposts to his perception of the things that are happening right now.
https://rayflanagan.bandcamp.com/
https://www.rayflanagan.net/
https://www.facebook.com/rayaflanagan
Kevin McCarthy:
At the heart of Kevin McCarthy’s music, you’ll find welcoming tones of Americana and at once be ensnared by his comforting, resonant, heartfelt delivery and variance on tradition. Kevin is a singer-songwriter based in Cleveland, Ohio by way of San Francisco & New York. Experiences in these cities, and places between, brought Kevin to the incredible cast of musicians performing on newly released recordings and touring with him this year. These relationships have shaped his music and filled his songs with authentic connection. McCarthy’s music has been likened to Uncle Tupelo, Wilco, Andrew Bird and such soulful singers as Jeff Buckley, Nick Drake, and Chris Whitley.
Since the release of his first EP, Anchors Away, in 2003, Kevin McCarthy continues to write and record exciting, explorative, introspective songs. Coming out of the pandemic, Kevin has crafted and compiled a couple album’s-worth of new music to be released in the coming months. Recording on-location, at home, over the internet and around the country, Kevin produced a full ensemble album featuring synths, accordion, melodica, saxophones, and a full post-jazz/rock band, as well as several intimate solo and duo acoustic tracks. He is touring in support of these recordings in the Fall of 2022 and Spring of 2023 throughout the Midwest and East Coast.
He has performed and recorded with a notable cast of musicians/composers including Josh Smith, Kurt Kotheimer, Scott Barkan, Jeremy Bleich, Mike Gamble, Noah Jarrett, Conor Elmes, Daniel Clarke, Jessie Harper, Jerry Becker, Eli Crews, Michael Coleman, Stewart Myers, Brian Jones, Chris Keup, and many others. He has shared bills with such notable performers as Marco Benevento, Robben Ford, Corey Harris, Robert Lockwood Jr., Carla Kihlstedt, Jessica Mayfield, The Blank Tapes, Dark Star Orchestra and many others.
www.corkmusic.com
The WMM Series is made possible with support from Cuyahoga Arts & Culture.